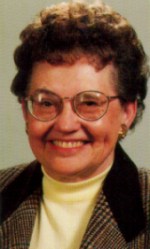 Ida Mae Kempel was born in Langdon, North Dakota and lived there until she moved to California at the age of 18. She married Walter Kempel with whom she had 8 children. In 1972 their oldest child was murdered. Ida Mae wrote about this tragedy in her first book, The Wings of Dawn. A sequel followed titled Where Bluebirds Sing.

For Ida Mae writing is as natural as eating and sleeping.. She first wrote poems at the age of 7 using block letters which were the only kind she had mastered.

During a busy life, writing was squeezed in whenever possible but it was not until the children were grown that she began to write on a regular basis. Subsequently her stories and articles appeared in various publications. Ida Mae lives in Alameda, California where she continues to write, travel and spend time with her children and grandchildren.

Along the Way, A Spiritual Journey by Ida Mae Kempel is one woman’s story of survival in a less than perfect world. Ida Mae Kempel writes about growing up in North Dakota, moving to California, and dealing with the many issues she had to face—a traumatic childhood, a husband’s addictions, and their daughter’s murder, to name a few.

Ultimately it is the story of faith in God, how His mercy and grace enabled the author to move forward in life and to deal with difficult circumstances.

What Was Jeremy's Egg? And Other Stories

"ONCE IN A WHILE A STORY COMES ALONG WHICH CAPTURES THE HEARTS OF PEOPLE EVERYWHERE."The film "Jeremy's Egg" was inspired by Ida Mae Kempel's award winning true short story, What was in Jeremy's Egg? It was first featured in Focus on the Family Magazine. Since then it has been widely published, both in the United States and world-wide. It is a surprising and inspirational story about a handicapped boy and the impact he has on the lives of those around him.

Independent Filmmaker Steve Viall has brought this family's moving story to the screen, combined with the compelling and powerful action tale of one man's life as a Navy Fighter Pilot. You will never forget this heart-touching story. Copies of the video Jeremy's Egg may be ordered by writing to: