See the video: The Red Kitchen, Introduction to a Fun Book

You raise your hands up to the stars
While running down the beach
You take my hands and begin dancing
“Come on!” she says. “Let’s celebrate our lives!”

Kathleen R. Harris was born in Denver, Colorado, one of four children. Her family moved to California when she was eight years old and they settled in Castro Valley, California. Her grandmother lived in Alameda on Santa Clara Avenue, and Kathleen got introduced to Alameda at a very young age while staying in her grandmother’s garage converted into a cute bedroom for her and her many cousins. Eventually, as an adult, she moved to Alameda in 1978 and stayed for approximately twenty years, during which time the events in The Red Kitchen took place. 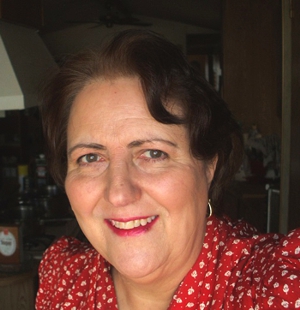 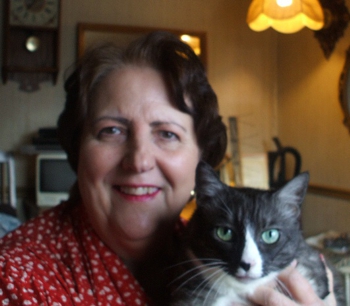 The Author and Sheba, her Assistant and Chief Animal Story Adviser

We all had or have that one special friend in our lives, and this book shares the story of one such person, who owned a Red Kitchen, with the purpose of bringing laughter into your hearts, just as you would have experienced had you been sitting right there at the table in the Red Kitchen on into the pet store and other adventures. This is the legacy Sharon had to give and this is what she left behind.

Excerpt From The Red Kitchen

I got a call from Sharon one day, and she told me she had finally found a house that she purchased with her boyfriend. It was an investment for him, but Sharon wanted it to “live” in. I came over to Alameda to see it. Sharon greeted me from the top of the many steps, which was customary for many of the old Victorians, as the living quarters were usually on the second floor. At the time the old houses were built, late 1800s, early 1900s, the bottom floor was for carriages and horses, thus, the many steps to get into the living quarters.

This particular house had an apartment on the first floor. That was great. Sharon could use that income to help pay the mortgage. She invited me in. Apparently, she got a good deal on it. An elderly lady had died, and I believe had no living relatives, so Sharon got it through whatever steps it took to purchase it.

The elderly woman was eccentric, and Sharon warned me as she invited me in, there were a lot of strange color choices on the walls! The first room as you entered looked “normal” to me, kind of off-white walls, but as you went into the large dining area and into the kitchen, one of the bedrooms off to the left had the most frightening color schemes, like somebody had taken several different colors of paint and had them each explode onto the walls! It was just insane. The back bedroom was painted just as crazy.

However, the very thing that really grabbed my attention was the kitchen. It was a kitchen like I had never seen…it was BRIGHT RED! I could not believe my eyes. I said, “You’ve got to be kidding about this kitchen, it’s so…bright!”

Sharon and I were laughing. I told her, “I bet you’re going to have some good times in this kitchen!” Boy, little did I know!

So there it was, the path had ended from Chestnut Gardens to here, to the Red Kitchen, and from there the ADVENTURES begin! 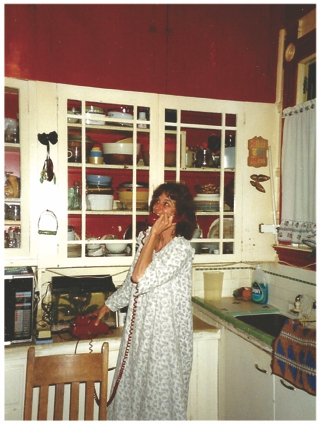 Sharon in the Red Kitchen, speaking with Kathy, the author, on the phone.

Pictures from a Cook Book written for Sharon by Kathy as an affectionate prank! 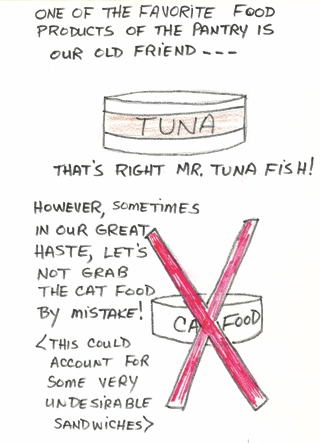 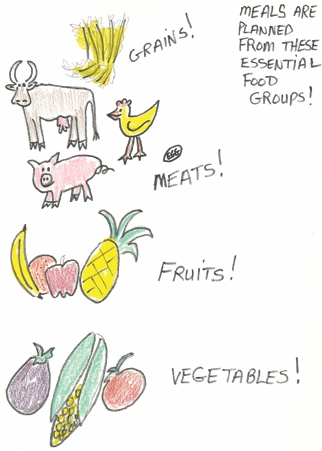 For further information or to purchase a copy of The Red Kitchen, contact Kathleen R. Harris at kreedette@aol.com