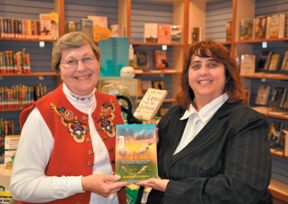 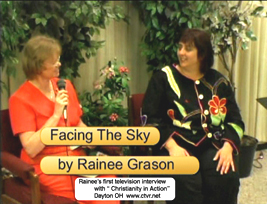 Rainee Grason is a new author who brings inspiration, encouragement, and hope to readers through her first book, Facing the Sky. More than an autobiography, these pages reveal how God broke through the darkness of a silent victim's struggle; how she accepted grace and freedom and began to really live, and not just have a life of existence.

As a young child, Rainee is molested by others outside her home; her father is an alcoholic before she is ten; and seeds of insecurity, anxiety, and guilt are planted.

At fourteen, Rainee becomes emotionally imprisoned by her relationship with a boyfriend who is two years older. She is raped; afterwards, the relationship continues.

Low self esteem creeps in and she looses sight of her own beliefs and values. Now sixteen and pregnant, ready to run away, Rainee comes to stand Facing the Sky in a life changing experience with God--an experience that will be forever blazed in her heart.

Rainee desired to write the autobiography as a testimony of the Lord's work in her life.

The story begins with that monumental moment when God extends His hand of grace, leading Rainee to freedom. Readers then experience the events of her childhood step-by-step in the Diary of Memories. Rainee then shares glimpses of her adult healing, challenging the reader to become more than a conqueror.

Having taken seven years to write, Rainee published Facing the Sky through Precious Grace Publications and Falcon Books in April 2008. Designated proceeds from the sale of each book are donated to organizations that support the identity and stopping of abuse. 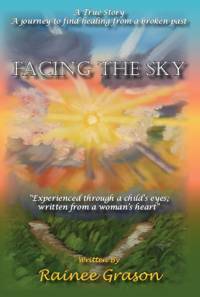 Rainee plans a sequel, Waterfall of Tears, to share her adult emotional and spiritual struggle to find herself and God. She will write of the unexpected trials, pain, and heartbreak of trying to conquer her past and to become everything God created her to be.

Rainee plans to publish
Waterfall of Tears in 2012.

Rainee is pleased to announce a donation of 30 copies of Facing the Sky was made in October of 2009 to the Tema Joint Church Library in Ghana West Africa. The book is sure to help those who suffer brokenness to conquer their past and have hope for the future.

A letter from the author:

Last night, I met with an author and her husband (who also happens to be a writer, as well as an artist) to discuss her self-published book, Facing the Sky. She had wondered about trying to find a traditional publisher to reprint the book and gain a wider audience, but after reading her unconventionally-formatted but powerful true story, I realized she needs to retain control.

The book is her life story, centering on a specific time in her teens but drawing in her childhood and adulthood in a sometimes linear, sometimes flashback/flash-forward style that works well for the material. She is a Christian, so her faith is very much part of the story, but traditional Christian publishing houses would probably gut the book, redacting the harshest elements, weakening its power.

In fact, a local bookstore refuses to stock the book because of a particularly raw scene describing the author’s rape by her boyfriend in her early teens.

This disturbs me. Rape isn’t pretty. It happens, even to children. It damages the psyche and the spirit. But Rainee Grason’s story shows that redemption is possible — not only possible, but triumphant. Remove that ugly scene, and the power of the truth is lost.

I’ll be posting more about this book in the next few days, and will include ordering and contact information, for those who want to buy the book or request the author as a special speaker for an event.

I had intended to post this part of the review for Facing the Sky (also available on Amazon.com) a few weeks ago, shortly after reading the book, but life intervened, plans were changed or forgotten, and now it’s the beginning of October. Zoiks!

We meet her as a teenager, facing the sky, feeling God’s love in the warm rays of the sunset. We overhear her thoughts about her boyfriend, their relationship, the rape.

One line of copy from back cover states, “She realizes she does have a choice — she can walk away from the imprisoning walls of the unhealthy relationship, but how?”

As events play out, she says goodbye to Gideon and hello to Cole. About a third of the way through the book, however, after she and Cole are married, Rainee pushes the curtain even further back, all the way to her earliest childhood memories, and reveals what led up to the night she stood, sixteen and pregnant, facing the sky.
Teenagers and adults alike will identify with much in this true story, including the themes of worthlessness, hurt, shame, abuse, teen sexuality, awkwardness, fear, alcoholism, the desire for a better life.

This is an excellent book for mothers and daughters to read together and discuss. It reminds us that even the darkest night doesn’t last forever, we are worth more than we think, and God is waiting to lead us into the light of a new day.

NOTE: Fathers and sons can also benefit from this book, because it addresses — obliquely yet clearly — the importance of strong, kind fathers and husbands. It is in the embrace of Cole’s understanding and strength that Rainee is able to heal at last, after she is suddenly confronted by matters she thought long resolved. By reading her story, young men may also see the painful, tragic results of selfishness and pride: many girls used, even raped, their lives forever marked by Gideon’s sexual desires.

Rainee Grason is available for speaking engagements (youth groups, writing groups, churches, etc.), and can be contacted as follows:

Audio and paperback versions of Facing the Sky are available:
$16 for paperbacks
$35 for 8-CD audio sets
(Price breaks are available for larger orders)

Rainee has donated proceeds to a Dayton Ohio women’s center for use in their sexual integrity program.

For information or questions about the book or CDs, contact the author at email: pgp@preciousgracepub.com In the subject line, show Attn: Rainee Grason