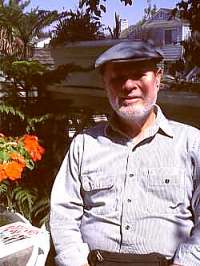 From Page 1, of the
Berkeley Daily Planet,
September 1999

Why now? Why Bill Clinton, when other presidents' extra marital affairs are legend? Howton asks and answers the question in the book that will be released next week.

"It was incredibly bizarre," said Howton, a 17 year Berkeley resident, interviewed Monday over coffee. A retired sociology professor and World War II veteran, Howton describes himself as "a sometimes radical leftist in the 50's".

The impeachment affair and its surrounding media hype was so "bizarre", that Howton plunged into the writing of what began as a journal account of the trial. It was a personal exercise, an attempt to make sense of what he saw on television and read in the papers. As the days ticked by, however, Howton said he was compelled by the significance of the event to turn his musings into a book.

The author, who published the book himself, concedes his easy-to-read diary form is somewhat "rough around the edges."

However, the advantage of by-passing editors and publishers is that Howton will have hot off the presses an "instant" book that can get out to the reading public.

It will get to the public while the story is still fresh, and it may get onto the reading lists of professors who will be dissecting the impeachment trial in their sociology and political science courses in the fall.

Howton taught sociology from 1961 to 1981 at City College of New York, then retired in Berkeley, where he had obtained his doctorate in the 1950s. He is the author of two scholarly tomes and numerous articles in the field of sociology.

The professor, however, chose to write this book under the pseudonym Wil F. Huston. "The voice in this book is a very different voice," Howton said. He didn't want his reading audience to confuse the scholar and the more folksy, playful author of this book.

Approaching the impeachment trial as if he and the rest of the TV viewing public were the real jurors, Howton writes, "The 100 personages sitting in judgment are keenly aware of the shadow jury beyond the TV cameras who are taking this in, processing it, coming to conclusions of their own about the performance of their own party and their own senators that could very well find expression in the ballot box: thumbs up or thumbs down."

The book is a far cry from the simple record of the facts of the trial as it moved from the House of Representatives to the Senate. Howton asks the fundamental question: "Why hadn't these folks' (Grover Cleveland, Warren G. Harding, Franklin Roosevelt, John F. Kennedy) romantic adventures sparked questions from prosecutors? Why now but not then?"

Howton believes it had something to do with Clinton personally. The president broke the Southern "code." He "went liberal on race, sex and the war in Vietnam," Howton writes in the book.

Howton downplays the significance of the cast of characters involved in the affair: Monica Lewinsky, herself, Betty Currie, Clinton's secretary, who held on to the gifts the president had given Lewinsky; and Vernon Jordan, the president's friend, who helped Lewinsky in her job search.

"The striking thing about these three is that whatever each of them did was for love, not money. Or power. And therefore not, in my view, capable of being construed as part of a conspiracy to cover up anything more than lies about sex to avoid personal embarrassment," Howton writes.

There was no crime, "no threat to the state," he argues.

"In dallying with Monica, he acted like an idiot and revealed a flaw of character when it comes to sex, when it comes to what one expects of an adult in the reasonable exercise of prudence."

In the end, Howton forgives and reminds his readers of the "big picture."

"Clinton does good things, like getting the Irish to start talking peace. And the stock market is up, unemployment is down, times are good," he says.

For more information about The Impeachment Trial Diary, call
Redrock Press at 510-841-3110.

F. William Howton was born on April 1, 1925, in Portland, Oregon. Both of his parents were raised on farms. His father was a miner. His mother brought up four children, of whom he is the eldest. The author grew up for the most part in mining country: small towns in Arizona, Nevada and California.

He enlisted in the U.S. Army, and served overseas in the UK, France, and Germany, from 1943 through 1946, in an engineer depot company.

His employment includes teaching at the College of Idaho; Human Factors scientist, developing the SAGE system of air defense at the System Development Corporation in Santa Monica; teaching at Los Angeles State College; and Department Chairman at the City University of New York.

Publications include “Mass Society in Crisis,” New York, 1965; “The Functionaries,” Chicago, 1969, plus numerous articles and essays.

Dr. Howton is currently working on his next book, a novella