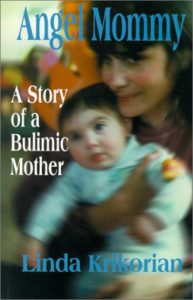 Angel Mommy is a moving and compelling account of the nightmarish world of bulimia, one which few people experience firsthand. The author has the courage to allow her readers entrance into this world and the desperate struggle, at times one of life or death, in which she has been engaged for most of her life. A normal, bright and attractive teenager, she gradually slipped into the cycle of binging and purging which became the driving force of her existence, and which threatened not only her life, but the lives of her unborn children. Ultimately, it is the love for her son and daughter which has given her the courage to live, and to write this sensitive and inspiring book, which provides a testament to the strength of the human spirit.

Buy from Amazon
For purchase or information e-mail krikorianpublishing@yahoo.com