Carry Me Back: A Family and National History of Freedom and Slavery 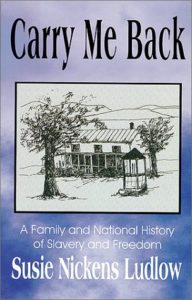 Intelligent and aware people all over the world know about the shameful history of slavery in this country, but few of them may also be aware of the African-Americans who came to the USA as free men and women, and remained free throughout their family’s history. In a sensitive and powerful memoir, Susie Nickens Ludlow traces the saga of her multiracial family, which includes ancestry that is black, white, and Native American, back to its origins in slavery and its origins in freedom.

The author illuminates a little-known aspect of black American life, and shares the rich, warm and vivid recollections of her own family, and their experiences, as well as of moments in history, such as the March on Washington and Dr. King’s “I have a dream” speech. She shares with us times of triumph and achievement, both for her family and black Americans, as well as those times when they suffered from prejudice and discrimination.

Without bitterness, she explores and analyzes colorism among both whites and blacks, as it exists in this country, and traces the path by which she came to reject color bias, and to realize her true identity as a woman of multi-ethnic background, as an American, and as a human being whose strength and hope spring from ancestors who came to this country in chains, ancestors who came of their own free will, and ancestors who occupied this land for thousands of years.