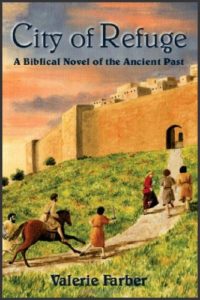 Bat-Shachar, a teenaged girl, gifted with beauty and intellect, languishes in the household of her father, a prominent Israelite scholar. Intimidated by Bat-Shachar’s coming of age, her father grows aloof. He scrutinizes her actions, and his discipline is heavy-handed. Her father’s rages drive Bat-Shachar from home. In the company of the family’s Canaanite maidservant, Bat-Shachar happens upon pagan rituals. The visions she sees shake her to the core of her existence.

Tzuriel is a metalworking apprentice. Upon seeing the agony of his people butchered by marauders, he vows to equip his nation for battle. After infiltrating enemy territory to acquire the forbidden skills of crafting iron weapons, Tzuriel faces an awesome fate, borne of a fleeting indiscretion.

The paths of Bat-Shachar and Tzuriel intertwine when they are expelled from their tribal villages. They race towards a city of refuge as bloodthirsty enemies pursue them relentlessly.

City of Refuge is set in the early years of Israelite nationhood. The tale of love, death, and vengeance captures a reader’s attention at the outset and does not relinquish it until the final page.