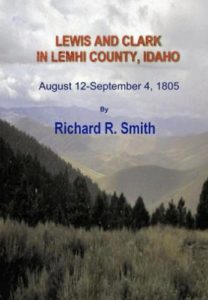 See what Lewis and Clark saw in the pages of “Lewis and Clark in Lemhi County, Idaho,” by Richard R. Smith. Every page contains full color photos of scenery, campsites and trails used by the Expedition while spending twenty-four days in Lemhi County. All photos are pristine, showing the land as it was in 1805.

See the land, the birds and the animals that were encountered here. Read the story of Sacajawea`s homeland and the famous “River of No Return.”

Anyone who has attempted to read the numerous books of the Lewis and Clark journals (among others) especially appreciates Richard Smith’s efforts. The English language usage and spelling of that period in history are difficult enough. Moreover, Lewis and Clark each kept journals, sometimes with one discussing events reported to him by the other. It is very difficult, at times, to discern who is describing what!

Finally, trekking this sometimes rugged, mountainous countryside to locate specific geographical sites is a major contribution of this author. His efforts should be of great assistance to casual tourists as well as historical scholars.

Born and raised in Salmon, Idaho, Richard R. Smith then served three years with the US Army, including activation during the Berlin crisis. He returned to Idaho where he received his Bachelor of Science (BS) and Master of Science (MS) degrees from the University of Idaho. It was during a freshman US history course that he developed a keen interest in Lewis and Clark; he began collecting books and studying about the Expedition in 1964.

After teaching for twelve years at the University of Idaho in Moscow, Idaho, and then at Washington State University in Pullman, Washington, Dick returned to Salmon. In 1977 he began going out and identifying geographical points mentioned in the Lewis and Clark journals. This continued until he had identified and traveled the entire trail in Lemhi County.

As Dick began writing his book in 1999, he re-traveled the Expedition’s trail and collected pictures of each campsite and point of interest. All are accurate as to location, season, and weather conditions experienced by the explorers. The notable exception is Camp Fortunate in Montana, which now lies submerged under the Clark Canyon Reservoir. He recently included existing informational signs in the county. A map is provided to aid the reader in locating all sites. There is also an appendix, which provides additional information, including more about the Lemhi Shoshoni people.