One Woman, Two Countries—Vignettes of a Life Fully Lived 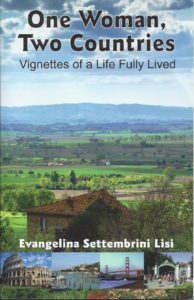 Evangelina Settembrini Lisi is without a doubt the narrating voice of a full and adventurous life, overflowing with deep emotions. Within these passionate, highly autobiographical stories, the author brings to life with her memories a piece of the Italy that “was”, and gives us a glimpse into key moments of Italian history. She paints a fresco with vivid, intense and realistic colors in the style of a Vittorio de Sica film.

Evangelina was born in Puglia, a region in Southern Italy. At the age of twenty, she moved to Trieste, a city in Northern Italy with her newlywed husband, Luigi, and where her son Paolo was born, who has given her four splendid grandchildren: Roman, Paris, Alex and Mason. She received a Master from the University of California, Berkeley, where she also taught. Nowadays she lives between the enchanting San Francisco Bay Area and her magical medieval home on the shores of Lake Trasimeno, in the ascetic region of Umbria, Italy.