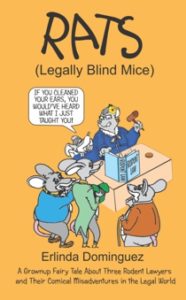 Rats: Legally Blind Mice, the latest book from Attorney and Author Erlinda Dominguez, is a biting, extremely sharp legal satire. In this novella, Author Dominguez lays bare the misdeeds of the Trio, or Triumvirate as they prefer to be called, three Rodents who are practicing attorneys in the field of personal injury. In the style of George Orwell’s Animal Farm, Ms. Dominguez creates a fantasy world which parodies the realities of life in the Justice System, as the three charlatan attorneys, Mr. Doe, Mr. User and Mr. Mad, later joined by a notorious lady Rat, Judge Bull, struggle to live lifestyles of the rich and famous and fail miserably. Rats is a hilarious but ultimately incisive exposé of the shenanigans carried out by an egotistical, scheming, money-mad and an incompetent threesome of the genus Rattus. The humorous illustrations add to the clever portrayal of a ‘brave new world,’ the world of Rats. Any resemblance to Rats living or dead is purely coincidental.