Rotor, A Novel of Destructive Forces 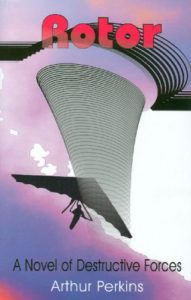 Paul Henry is down on his luck. His wife has left him, his work partner wants his job, his car is about to collapse, and his hang glider, Rocinante, his only other possession of importance, is a junk heap of twisted metal and shredded cloth following a poorly-executed launch. Now he is becoming entangled in a battle between a small group of environmental activists and unscrupulous landfill operator Curtis Grubley, who has managed to suborn the local county government and neutralize the environmental protection agencies in his push to locate his new dump on top of environmentally sensitive wetlands.

The battle turns violent, throwing Paul in with activist Millie Farnsworth in the wake of escalating threats on their lives. The danger brings romance and a promise of a shared future.

But before that promise can be fulfilled, they must rid themselves of Grubley and his thugs.