Tell Me a Story, Grandpa 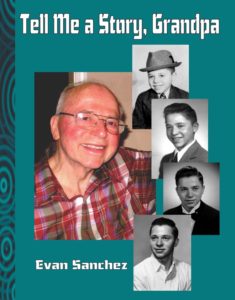 Evan was born in 1930 during the Great Depression. Leaving Walsenburg, Colorado in 1943, his parents packed up the family and traveled to Oakland, California to work in the shipyards.

Evan attended St. Joseph’s High School in Alameda where he developed his leadership skills. In 1948, he entered the University of California at Berkeley where he received a Bachelor’s and a Master’s Degree in Criminology. His social life included joining Newman Club where he was President.

On July 30, 1955, Evan married the love of his life, Caroline. They have five beautiful daughters and many grandchildren and great-grandchildren. The year 2020 marks 65 years of marriage.

After retirement Caroline encouraged him to join her in attending writing classes. After many years of enjoying telling stories to his grandchildren, he decided to share his life with the rest of the family.