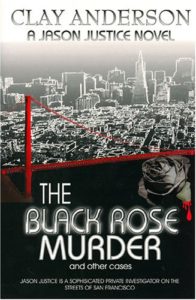 The Black Rose Murder by Clay Anderson is the story of Jason Justice, a sophisticated private detective in San Francisco, who is searching for the answers to several exciting mysteries. Will JJ catch the fat man who escaped after embezzling millions of dollars from a city construction project? Did the millionaire playboy rape the party girl or was she lying about the attack? Did the redheaded clown dressed in a black tuxedo really deliver a bomb in a flower bouquet to a federal office? Did the high-powered politician that loves to dress in women’s clothes have his wife killed, so that he could be with his bisexual female lover?

For purchase or information e-mail ClayR2D2@aol.com