The Thundergods’ Gold & House of the Fire Demon 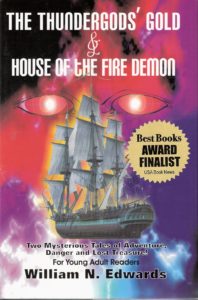 In the literary tradition of Young Detectives like Nancy Drew and The Hardy Boys, author Bill Edwards has written two exciting stories of mystery and lost treasure. Both are fast-moving thrillers, with likeable young characters, intricate mysteries, and lively, suspenseful plots.

In The Thundergods’ Gold, brother and sister Rick and Teri turn prospectors to search for the Lost Dutchman Mine in the lonely Superstition Mountains of Arizona. On the Apache Trail, they are stalked and menaced by a deadly gang of criminals who caused their father’s death, and are ready to kill again. Ghosts of two ancient tribes—one Native American and one fabled to be from Europe—also cast their eerie shadows over the story.

House of the Fire Demon follows long-time friends Mike and Shari as they turn teenage detectives to solve a decades long puzzle of a cursed old house and right a wrong done to innocent early immigrants to San Francisco. To do so, they must brave the wrath of the terrifying Fire Demon, the ghost of an evil sea captain, along the rugged and treacherous coast of Northern California.