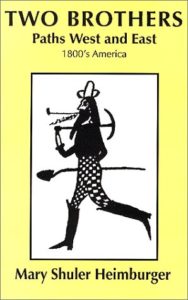 Two Brothers Paths West and East by Mary Shuler Heimburger is currently featured at the Oakland Museum Bookstore, during the California Gold Rush Exhibition, and at the.Alameda Historical Museum.

“Let’s take a look at a box of Gold Rush letters in Grandma’s attic…your grandfather was a Forty Niner.” With these words, Mary Heimburger’s father Frank Shuler introduced her to a legacy of family history, which was to lead to the bookTwo Brothers–Paths West and East. The Author’s historical research and the letters, notebooks, and documents which she collected, create a fascinating story of an odyssey from the Pennsylvania Dutch village of Powder Valley to the Gold Rush mines of old California. Her book gives an unforgettable glimpse into the daily lives, struggles for survival, and dreams of American pioneers.