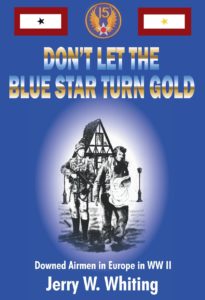 These are true stories of airmen who didn’t return from bombing missions over Europe. To those flying with them, they were simply gone. Many died in fiery crashes, while others became POWs or Evadees. A few were captured and later escaped and a small number were shot in their parachutes or killed after landing. Back at home, the families waited, often not knowing if a loved one survived. The stories are about the struggle to survive, so that blue star proudly hanging in the window at home wouldn’t be replaced by a gold one.

They are accounts of love, duty and courage. Some include information about those who aided the downed airmen. Each is placed in the context of what was happening elsewhere in the world at the time. The author shares background history of how each story came to be, often with surprising revelations. Painstakingly researched, this book is a must read for anyone interested in 20th Century American history, particularly for those interested in WWII.